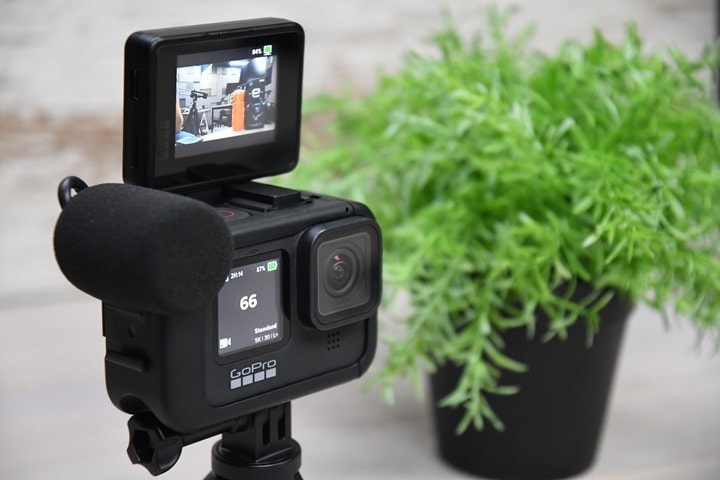 Exactly one year ago today GoPro announced the Display Mod, as part of the larger Hero 8 suite. At the time, a year before the Hero 9 would come out, it promised a way to see yourself from the front of the camera, aimed somewhat at vloggers, but realistically anyone that just wanted to frame the subject from in front of the camera (which I think is way more people than just vloggers). Undoubtedly it was a response to the DJI OSMO Action with it’s dual front and rear color screens.

Unfortunately, delay after delay after, it wouldn’t finally see the light until just a week or two ago. By then, the GoPro Hero 9 had launched, which featured a similar front-facing screen as the DJI OSMO Action, negating the value for most people. Still, plenty of people have the Hero 8 cameras, and the Display Mod also offers a larger screen than the Hero 9’s front facing display. So perhaps there was still some value there – it was time to find out!

If ya wanna jump right in, here’s my full video on it:

Thus, I set out to give things a whirl and see whether it’s worth spending the $ 79 for.

To begin, the Display Mod comes with both a USB-C charging cable (just like a normal GoPro would), as well as a small case for it, keeping it safe for when it’s not on your camera: 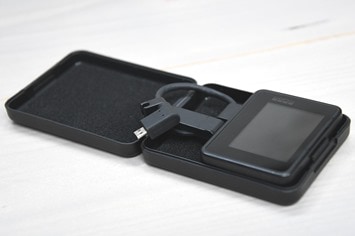 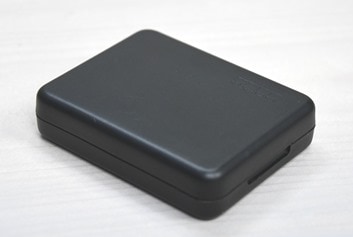 If we take the Display Mod out of the case you’ll see it’s got one button on the side, one USB-C port for charging, and one micro-HDMI cable swinging out the side of it. 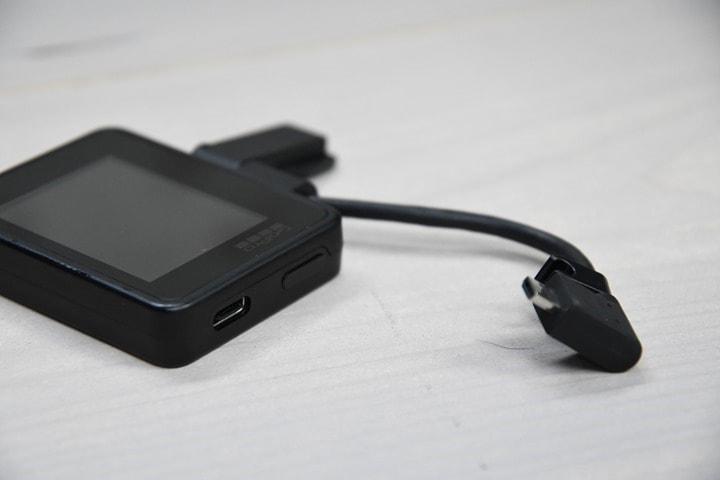 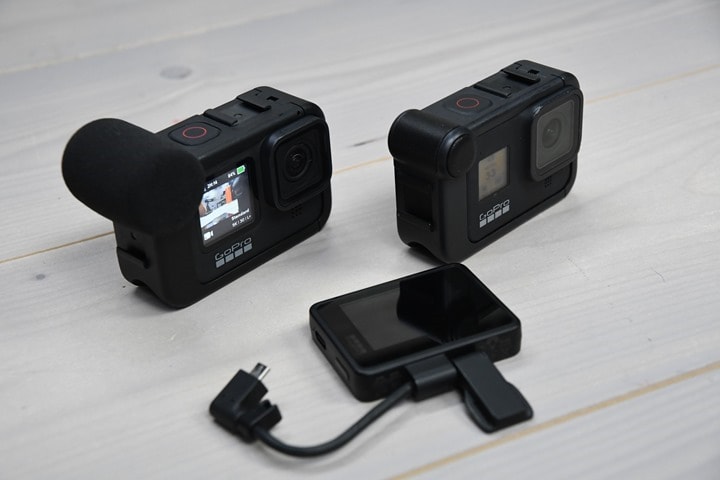 But, the good news is that as long as you have one the appropriate Media Mod for the right cameras, then you can use the same Display Mod with either. Also, for fun, I tried using the Media Mod with the GoPro Hero 7 (which has an HDMI port on it), and while it would illuminate, it would only show a gallery view of existing content on the card (like plugging into a TV), except half the navigation icons are cut-off, so you’re basically navigating blindly with the Hero 7 Mode & Power Buttons, hoping you don’t delete anything in the process. 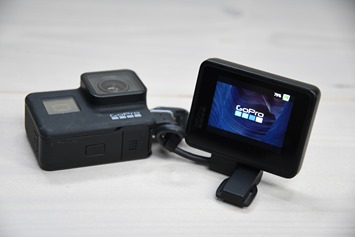 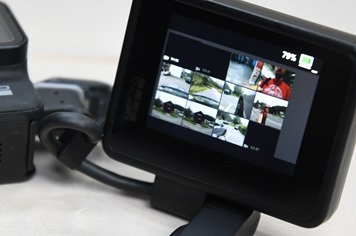 Ok, so to use it you’ll need to first slide it into the upper cold-shoe adapter on the Hero 8 or Hero 9 Media Mod, like so: 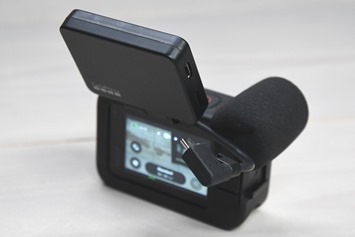 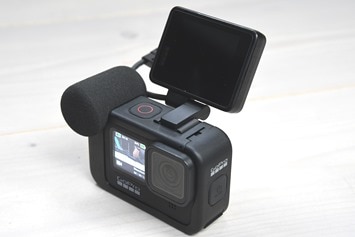 Then, you’ll go ahead do a funky twisting snake maneuver with the cable to get it into its micro-HDMI hole without it flopping all over the place. It’ll look like this when done: 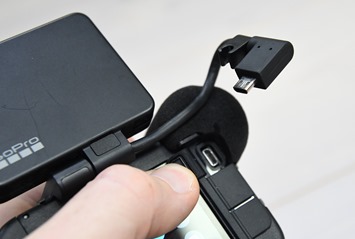 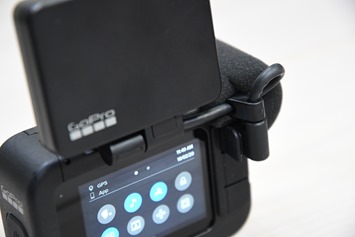 Finally, you’ll snap the cable holder thingy to the cable, to keep the loop-de-loop in place (as seen above):

Now, you’ll twist up the Display Mod, which has the screen on the front-facing side. This hinge seems well built in terms of up/down movement, but wouldn’t do well with a strong shear (lateral) or twisting force on it. Long term I think disconnecting and re-connecting the wire is probably what will break first. 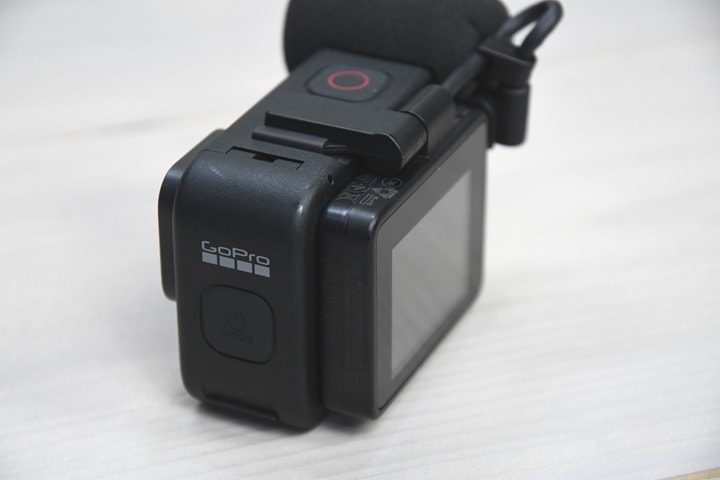 Next, go ahead and hold down the left button, this turns it on. If you have the screen on, but not yet the GoPro, you’ll see this (which assumes you haven’t connected the cable). You’ll also see the battery state in the corner (of the display mod). Once you turn on your GoPro, you’ll see yourself on the Display Mod, and the GoPro Hero 8 or 9 back screen will turn off: 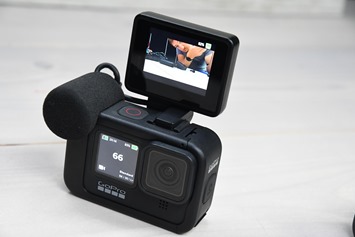 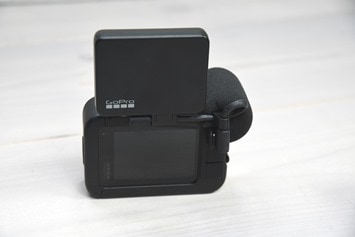 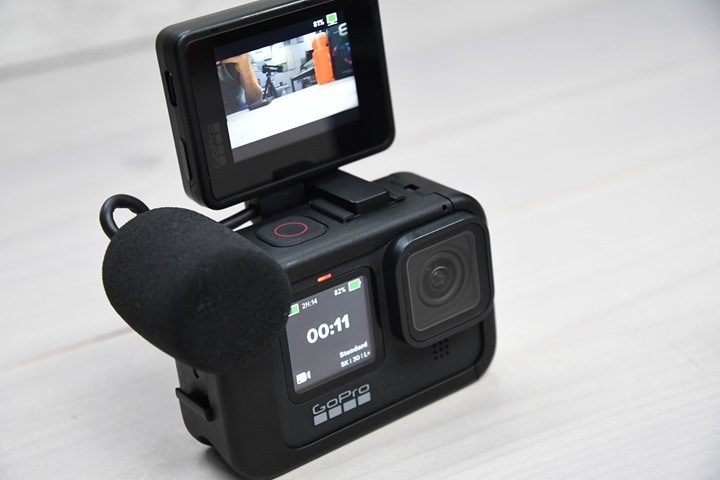 And here’s what it looks like on the Hero 8: 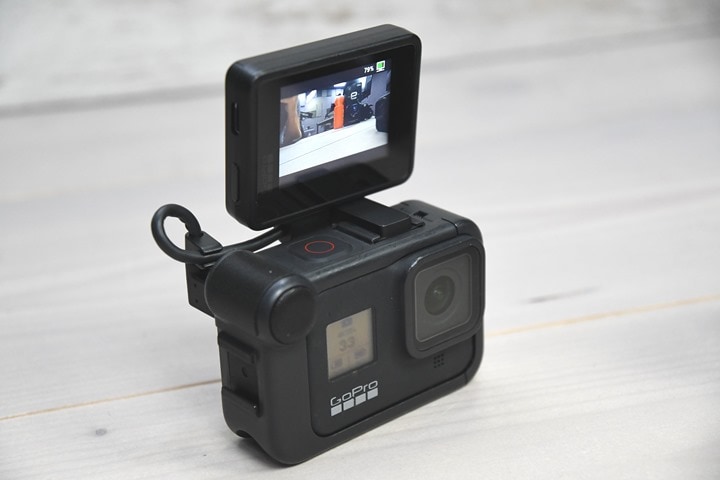 And thus, we arrive at arguably the worst part of the GoPro Display Mod, turning it around and finding your rear display turned off: 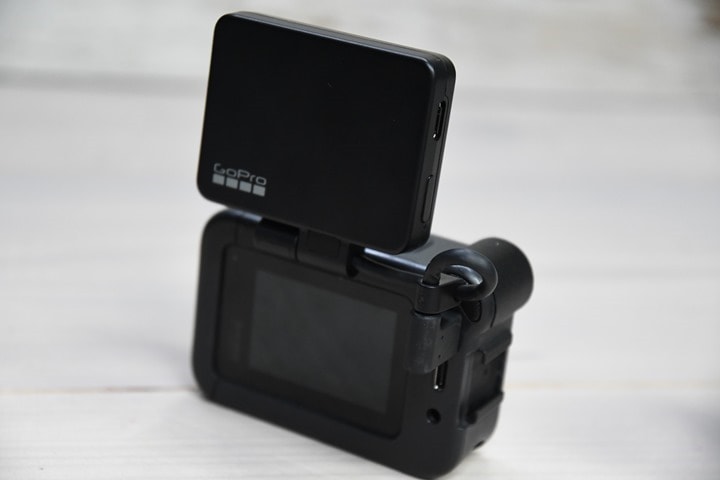 At first you’re like – OK, no biggie, right? Except…biggie. See, you can’t adjust any settings now unless you literally turn off the Display Mod (which means it’s now sitting there flipped up and off – cause if it’s flipped down, it blocks your rear touchscreen): 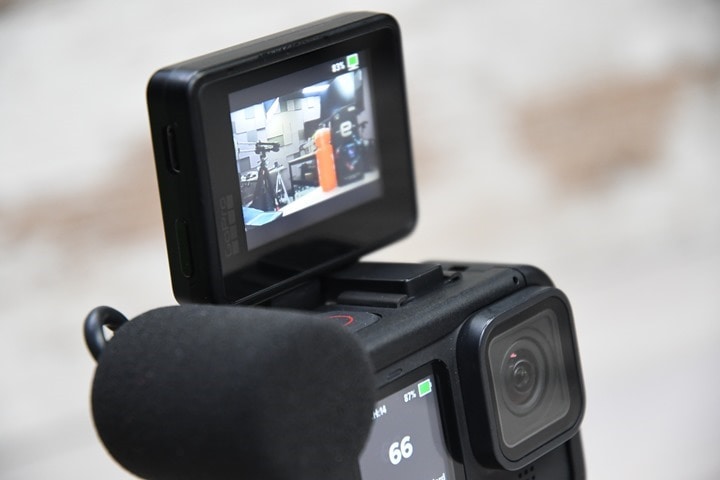 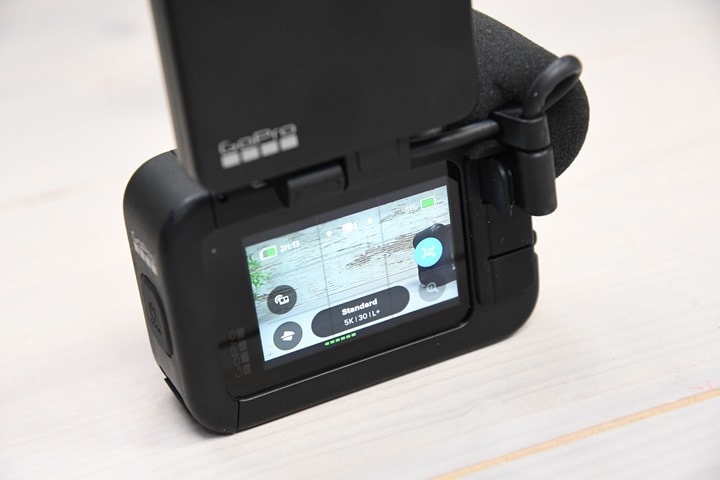 That’d be brilliant on the Display Mod, and arguably, there’s no better place for that than facing yourself – since that’s kinda sorta when you want to know whether the audio is working (perhaps wireless mics you’ve got plugged in like I do). Except nope.

Or, perhaps you want to adjust from Wide to the new GoPro Hero 9 Linear Horizon Leveling mode. Nope, you can’t do that either without shutting off the Display Mod, waiting for it to slowly disconnect itself, and then illuminate the other screen. And then of course once that’s done, you’ll turn back your Display Mod on.

So when you’re not having the Display Mod in use, then you can flip down the screen like this (shown partially, it goes all the way down as shown above elsewhere): 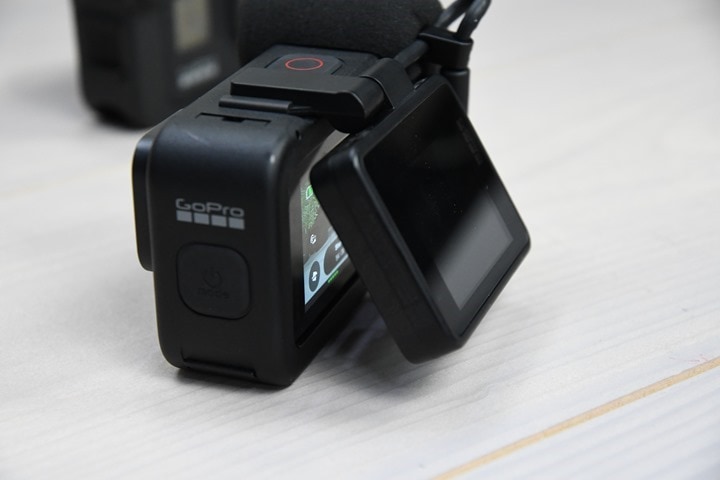 And that’s fine, you can still see the GoPro screen. Except it doesn’t go to sleep like the normal screen does. So it’ll just burn battery forever. Also, again, you can’t adjust any settings, or even see the recording times from the back – because that’s only on the status.  Mind, you, all this is the same on the Hero 8 or Hero 9.

Further, it ignores the GoPro display timeout settings as well. It’ll just stay on forever, until the GoPro turns off physically, in which case two minutes later the Display Mod turns off too. But this doesn’t match the normal settings where the displays go to sleep (timeout) earlier to prevent battery drain. 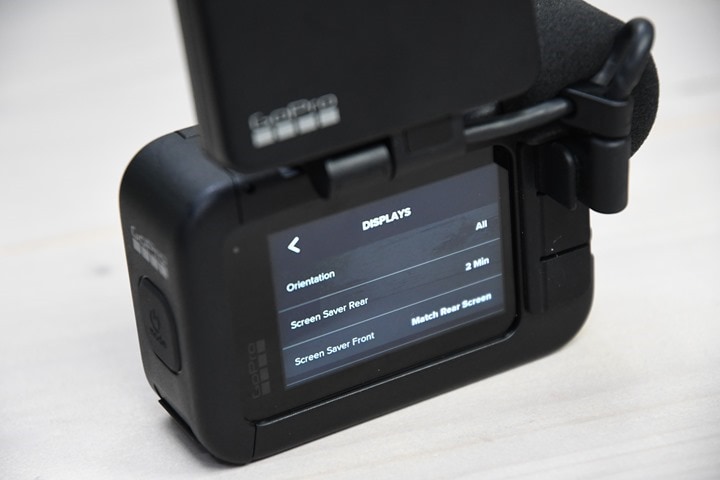 As in, there’s nothing else to talk about. That’s the sum total of the GoPro Display Mod’s capabilities. It’s basically a simple non-touchscreen display that you clip on the top and it reduces the functionality of your GoPro, by only very slightly increasing one aspect (seeing yourself on the front if on the Hero 8, or slightly bigger on the Hero 9). But that’s a massive tradeoff for the functions.

Since as of this writing there isn’t any public manual yet available (coming soon I’m told), I figured I’d cover some FAQ type items here. Also, it’s sometimes faster for me to put answers to common questions here than wrap a bunch of fancy text around them in a paragraph.

Will the GoPro Display Mod work without the Media Mod?

Is the GoPro Display Mod waterproof?

Is the GoPro Display Mod a touch screen?

No, that’d be incredibly useful if it were.

How big is the GoPro Display Mod?

The screen measures 2” diagonal and has a resolution of 480×320, the exact same as the GoPro Hero 8 rear screen (but smaller than the Hero 9 rear screen).

Does the Display Mod drain the GoPro camera’s battery?

How long does the battery last?

GoPro says the 680mAh battery has a runtime of about 90 minutes, that seems about right in my testing.

Does the Display Mod output at the same time as the Hero 9 back screen?

Does the Display Mod output at the same time as the Hero 8 back screen?

No, same restriction as the Hero 9 above, basically one or the other. 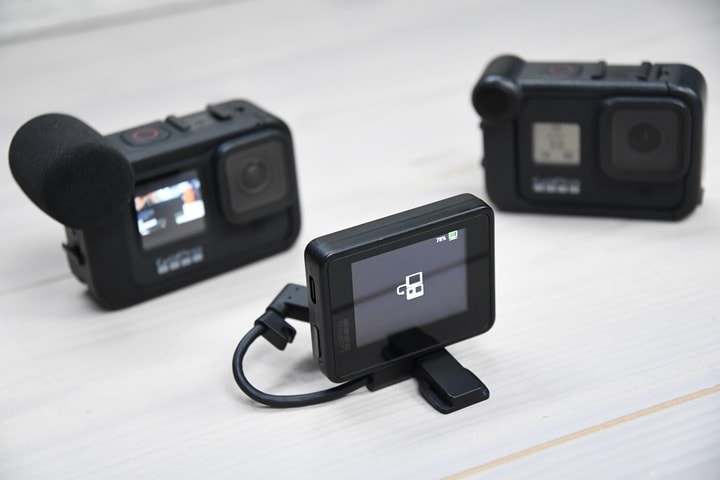 When GoPro announced the Display Mod, it was clearly in response to DJI. Some day we’ll find out for real whether this was in the hopper before DJI announced their OSMO Action 5 months earlier. My guess is it might have been on a napkin somewhere, but that’s about it. When GoPro held various media events leading up to the Hero 8 launch last September, the Display Mod was nowhere to be found, save under a glass case…untouchable. Yet, it was still slated to be released by December 2019 (something I was skeptical on at the time).

Fast forward to January 2020 and the Display Mod made its first appearance at CES in the booth for all to touch and caress. From briefly playing with it then, it was clear it was a hot mess. Which, probably explains why it was delayed and delayed and delayed until now.

I’ve bought literally almost every product GoPro has made. Every action cam, almost every mount, and even that drone. Yes, the remotes and accessory cables too. And ultimately, I think this is the most disappointing thing GoPro has made.  It’s as if the concept never really left the napkin stage and went through a proper productization. It’s as if someone shipped the napkin off to a manufacturer in Asia, and they shipped back this hardware with a coffee-stained half-ripped sticky note that says “KThxBye!”.

For Hero 8 users this would have helped bridge the gap, and sure, if you’ve already got the Hero 8 + Hero 8 Media Mod, and don’t care about changing settings or often changing the direction of your camera to point at something else, then maybe this is a good intermediate option for ya. But if you’ve got a Hero 8 with no Media Mod, you’re basically looking at $ 160 for both the Media Mod + Display Mod, which is about half-way to the cost of a Hero 9 assuming you’ve got GoPro Plus.

Even in the case of the Hero 9, there’s so much real potential for the Display Mod for its intended target audience – vloggers. Why couldn’t GoPro have put the audio levels on the screen? Why not a exposure graph? Why not additional ProTune metrics on the screen like ISO or shutter speed? Why not the ability to change zoom levels like the Hero 9 screen? Why not a 16:9 overlay when recording 4:3 content? Why not even GoPro GPS-based metrics that are available through the app like speed? Why not dual-screen support like their actual product page originally showed? Why doesn’t it auto shut–off the screen per the GoPro screen savings settings? Why can’t I change settings when the Display Mod is enabled?

While I can hope some of those things happen, the reality is that I suspect they won’t. Which is too bad, as I think there actually is some use cases for the Display Mod, but as of today I’d have a really hard time recommending it to anyone. But hey, on the bright side – the Hero 9 Media Mod and Hero 9 Max SV Mod are actually mostly pretty cool…so more on those shortly.