Today Google finally launched its long-awaited Pixel Watch. No wearable device has been rumored to “happen soon” as many years as the Pixel Watch. But this past spring Google confirmed it’d be coming this fall, and here we are. The Pixel Watch is a Wear OS device (as expected) that also runs a tightly integrated Fitbit experience, logical, given Google’s purchase of Fitbit a few years back. The device takes pretty much everything you’d expect from a high-end Fitbit (like the Fitbit Sense/Sense 2), and blends it with the specs of a mainstream Wear OS watch. Except very very sleek/modern looking, and, has two buttons – a digital crown and a single button above it.

There aren’t many surprises here, not just because of the leaks, but because both of these two entities (Fitbit & Wear OS) are fairly well known. And when they have a child, then the offspring simply takes the form of the combined parents. This first iteration is just that – a first iteration. Google says they aimed to build the watch that has the widest appeal, and we see that in aspects like size and usability. So with that, let’s dive into it. 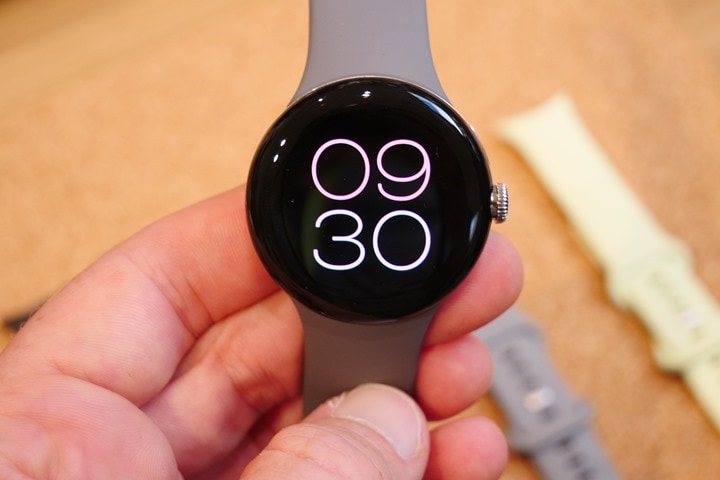 As usual with specs, there’s the hardware side and the software side. Starting off with the hardware components first:

And then we’ve got the software side of things, covering both the platform and Fitbit pieces.

As one might expect, it’s kinda hard to encapsulate the entirety of a wearable platform (be it Apple/Google/Garmin/etc…) into a handful of bullet points, especially given there’s likely thousands of features to cover. But again, the general way you can look at things is that if it’s on a Wear OS 3 watch it’s here, and if it’s on the Fitbit Sense 2, it’s here. Make sense?

In terms of lack of iPhone integration, someone did actually ask that during one of the media calls. While it might seem obvious that a watch made by Google (guardian of Android) would lack iPhone support – the simple reality s that Google has had Wear OS support on iPhone for many years. That basically ended last year when Samsung launched the first Wear OS 3 watch (the Samsung Galaxy Watch 4 series), and continues there here with both Samsung and Google’s offerings.

Google noted that the main reason was that they didn’t feel like they could get the integration they wanted, due to Apple’s lack of API for the messaging (both models) and phone number sharing pieces specifically (cellular models). And they are correct, Apple doesn’t permit any 3rd party hardware to reply to text messages/iMessage (whereas the Apple Watch can). However at the same time, that never stopped them in the past from offering watches, and it doesn’t stop numerous 3rd party companies either. Still, I get it – it’s a a frustrating walled garden limit of Apple that impacts more than just the Garmin’s of the world (who also face this). Sadly, I don’t see that changing anytime soon. 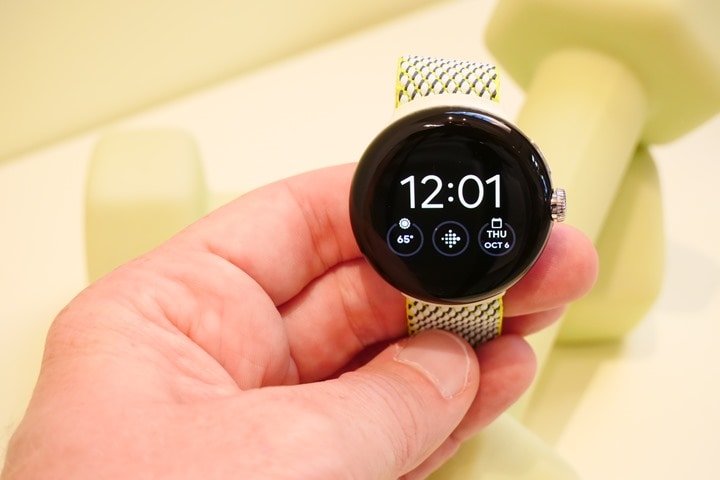 First up, we’ve got the size of the watch. Being a 41mm watch, it’s on the smaller end of smartwatches today, which generally range in the 44-50mm size, but it doesn’t feel awkwardly small – just…well…smaller. The very circular/bubble looking design won’t appeal to everyone, but I think Google has done a good job in terms of the band and color integration options. Further, while the watch bezel looks big on paper and in renders, it actually doesn’t seem that big in real-life. I think it’s because of the curved nature of the edges, meaning that it tapers off very quickly. 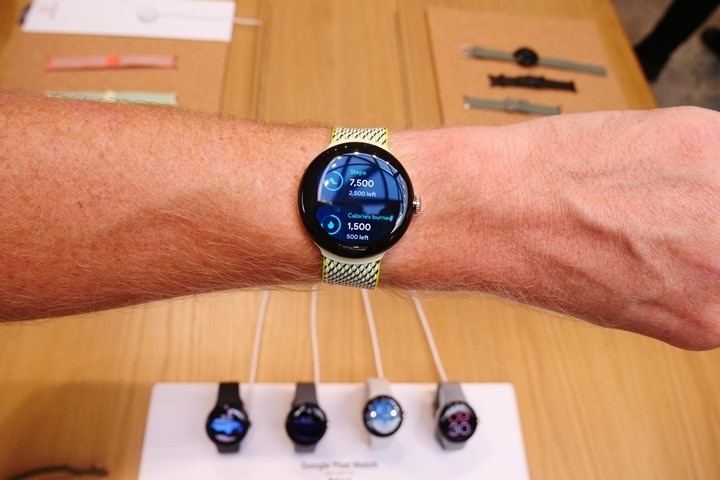 There’s a ton of band options. While there’s six core band types, within that there’s multiple band colors. Options include faux-leather, a woven strap, an active strap, metal (coming next spring), and a fabric stretchy one.

The band has a pretty unique connection point that’s entirely hidden inside the watch (versus an outside attachment point like most watches). So you basically rotate the bands to lock into place. It’s clever, though, I wonder going forward into future versions how much this will be retained or be a constraint since it does take up valuable internal space. The pins that you see there are for diagnostic/troubleshooting purposes. 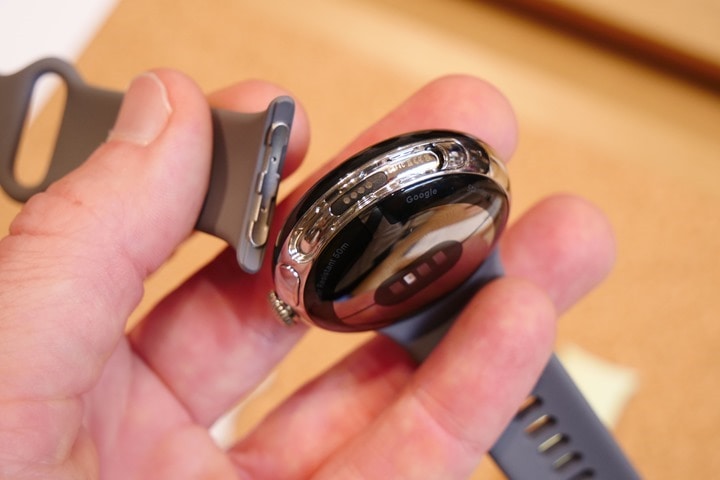 Next, the display is always-on, and Google says it’ll last 24 hours in smartwatch mode (basically the same ballpark as the Apple Watch Series 8 or SE). When your wrist is lowered, the screen dims, and then brightens as you raise it – like most always-on AMOLED displays. 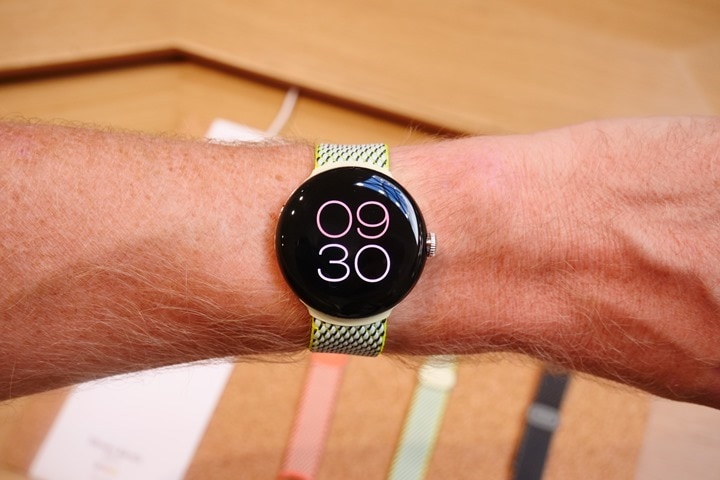 On the back you can see the new optical HR sensor, which includes ECG and Afib detection. This sensor is different from the Fitbit Sense 2 sensor, both in terms of hardware as well as advanced machine-learning algorithms that Google says are used in real-time during workouts to improve HR accuracy. Obviously, as always, that’ll be something I test in-detail. 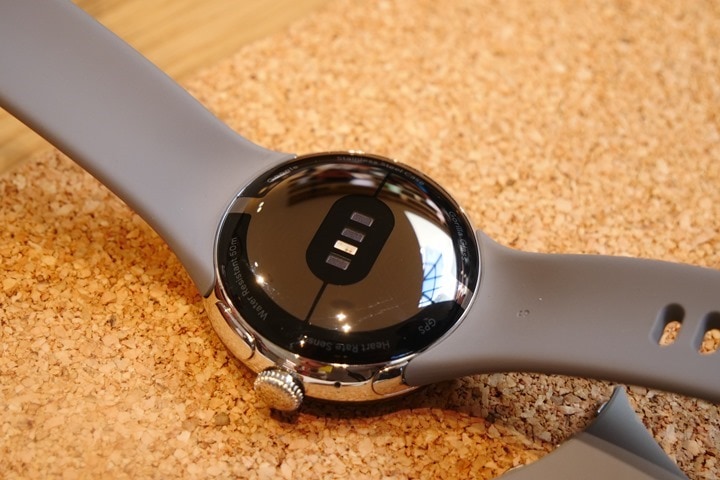 Before we dive into the Fitbit aspects, some general stuffs. The upper right button accesses your recent apps list, but you can also long hold it to access Google Assistant (and then use the mic/speaker to have a discussion about whatever it is you need Google to help you with). You can also use the digital crown as both a scroll wheel and a button. And then of course there’s the touchscreen itself. I didn’t have any navigation issues with the touchscreen (indoors in a dry environment). In the case of Google Maps for example, it’ll do turn by turn directions – but that’s more for point to point journey’s than any sort of navigation from a sports standpoint. 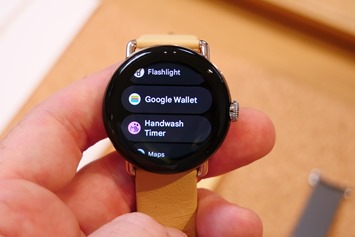 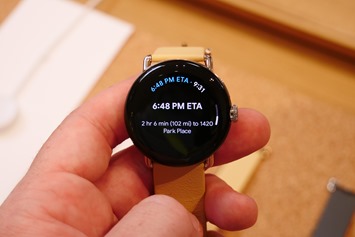 Lastly, we’ve got the Fitbit integration – which is the first Wear OS device with Fitbit built in (Google has hinted this will come to other non-Google Fitbit devices). Probably the biggest claim out of this is that it’s “Fitbit’s most accurate heart rate tracking yet”. Google reiterated this claim numerous times, as well as the 1-second recording rate 24×7, both in pre-event briefings and the keynote itself, as well as numerous discussions with Fitbit employees at the event. I’m optimistic that given how excited they seem about this specific point (and the entire mini-movie they dedicated to it within the keynote), that perhaps it’ll actually be accurate. More soon there, obviously. 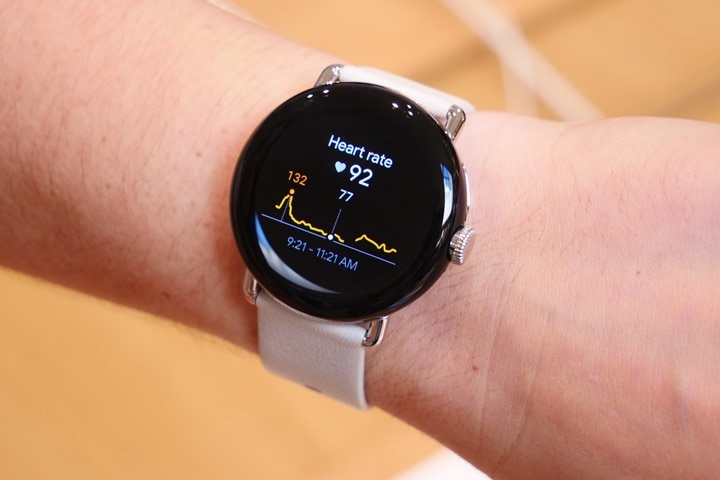 For the most part (in a good way), the Fitbit experience on the Pixel Watch feels near identical to that of the Fitbit Sense 2. Many of the data pages and design styles are all the same. There’s options to have things directly on the default watch faces, and there’s also specific tiles that are Fitbit driven. In order to access these you’ll sign-in with your Fitbit account (which is free, unless you’re looking at Fitbit Premium features. 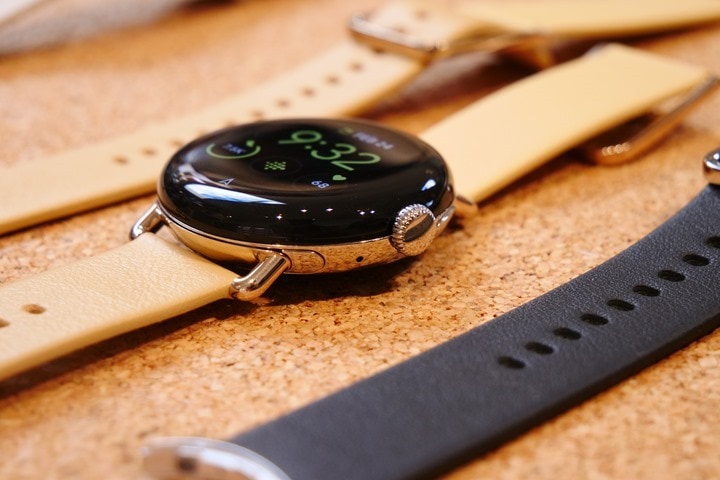 Like many companies, both big and small, when you launch your first product you’re aiming to find the product with the widest possible appeal to cement your position in the market. That’s what the Pixel Watch is – it’s a watch designed to appeal to the widest possible market in terms of looks, size, band styles, features, and price points. This version isn’t designed to compete directly with sports-focused watches, instead, like Apple pre-Ultra, it’s designed to to have wide mainstream appeal that does ‘good enough’ in a sports setting for most people.

The core smartwatch features here compare pretty much on-point to similarly priced offerings from from Samsung, Huawei and Apple. Sure, there are differences here and there – both in hardware and software. But on the whole they are relatively minor. Most of those differences are aligned more to wearable platforms themselves, rather than the hardware of the watches. Exceptions however would include Samsung’s blood pressure monitoring features, but those require calibration against a medical device first, and have iffy accuracy even once done. Of course, all of their competitors offer multiple sizes of their watches, which can be a factor – especially for those wanting a larger watch.

Where things get most interesting for the Pixel Watch is the Fitbit integration. As noted earlier, effectively they’ve taken a Fitbit Sense 2 (in features) and stuffed it into the Pixel Watch. You’ll link up to your account as normal, and then instantly, your Fitbit data is there. If you’re coming from an older Fitbit device, that can be a considerable advantage – as migrating between the silo’d fitness/health platforms of today, is mostly non-existent otherwise. Google says they’ve spent considerable time on the optical HR accuracy of the Pixel Watch, via both hardware and software. I’m interested in putting this to the test, given some of the challenges that Fitbit has had in this arena.

With that – stay tuned for a full in-depth review soon!