I hadn’t really planned on writing a separate post for the video shown above, where I put the Apple Watch Ultra in my underwater depth testing chamber. Mostly because my list of non-Apple things is growing right now, and there’s lots of other cool stuff to get to. However, after I published the video I’ve seen some questions on the lack of Apple’s ascent rate warnings and safety stops. So, I figured I’d quickly cover that here, merely as somewhere to link to.

First though, in case you haven’t watch the video – you should. Especially if you’re into geeky things (that’s why you’re here, right?). For those long-term readings, you’ll remember nearly a decade ago I had an depth testing chamber made, which allows me to simulate various depths – including creating entire second by second dive profiles. I can literally re-create any dive profile I want and have the machine control it, to the second emulating the dive. It’s super cool. I go into the entire backstory of this in the last 3 minutes or so of the video (literally titled “Story Time”).

However, before we get there, I explain that basically the Apple Watch Ultra is a certified dive device, and that it has two levels of ‘design’. The first is the hardware design, which is certified to 100m in depth. And then the second is their software app, which is designed for usage to 40m (131ft) of depth.  That native app is called…umm…Depth. And it essentially aims to show your current, well…depth (and duration/water temp). But that’s it. 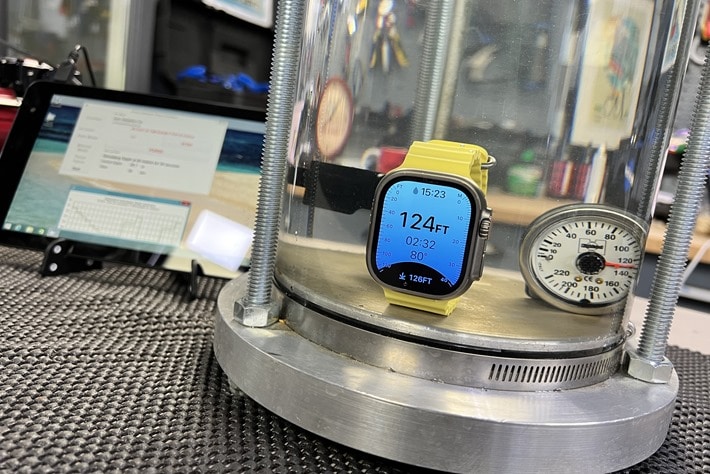 But, Apple made a big deal in the keynote about their partnership with Huish Outdoors and their upcoming app called the Oceanic+ app. That app (which costs $ 79/year) has all the dive related functions you’d find in a normal dive computer. Things like dive planning, water type, ascent warnings, safety stops, mixed gas options, etc… That app isn’t available today, and is slated for sometime this fall.

Now in the keynote, they briefly showed some app data pages, but it was slim pickings. However, if you found the right person over in the hands-on area at the post-keynote tables, there was a guy that was demoing the app. I got a long-form hands-on demo, but it wasn’t entirely the focus on my time there. So while that was cool (there’s some tidbits in my original Apple Watch Ultra video), what’s more useful is this nifty chart that I was sent, which shows a slate of screenshots from the Oceanic+ app, including things like ascent warnings, etc…

And then this all pairs with the Oceanic+ phone app, which has a dive log, including showing the entry/exit GPS points on the map and the full details of the dive (plus pre-dive planning). 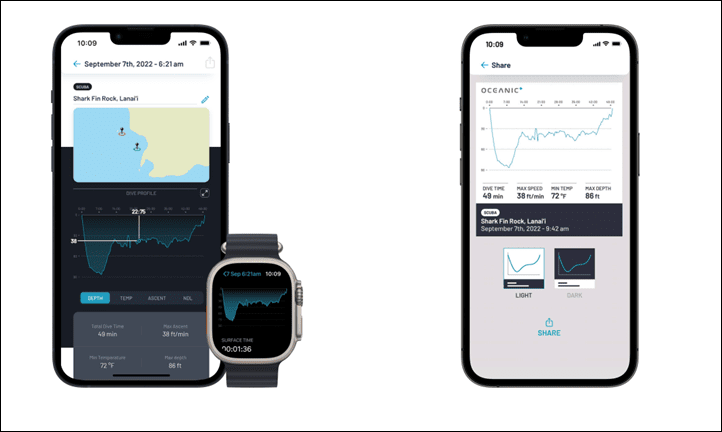 Of course, all of this would make for a super interesting comparison to the Garmin Descent G1 ($ 649), which has been sitting in my long-term testing queue for many months. I’ve got a number of dives in on it, and a boatload of non-dive stuff as well. Basically, the Descent G1 is an Instinct 2 Solar, but with all the dive stuff of Garmin’s higher end Descent MK2 series ($ 1,299) . The core dive-specific difference is it lacks air integration (which then requires the $ 1,499 version of the MK2, plus Air Integration module for another $ 400). Below, the Descent G1. 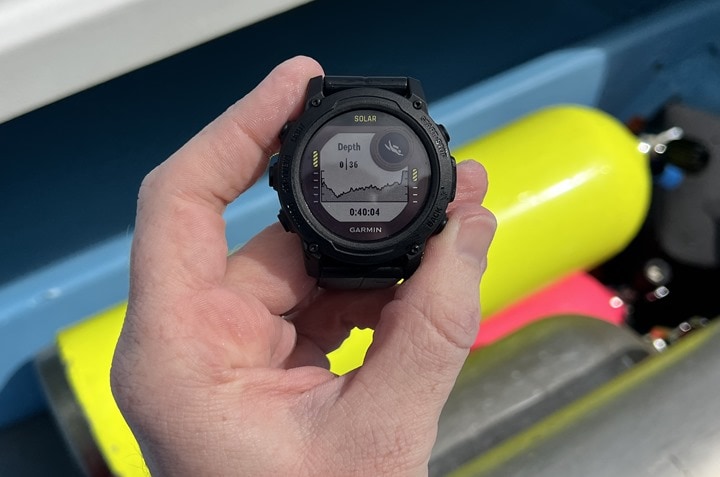 Price-wise, the Descent G1 is cheaper than the Apple Watch Ultra ($ 799), and of course has all the native dive stuff built-in, whereas the Ultra would at present require the $ 79/month subscription for the Oceanic+ app. Obviously, there’s a gazillion other differences between the two watches.

Anyways, that’s getting off on a tangent, but a few of you have asked my thoughts there as well. Certainly, there’s many reasons why someone would choose Garmin vs Apple or vice versa, beyond just diving. And until the Oceanic+ app releases, it’s hard to know how exactly those two feature sets compare.

With that, hope you found the video interesting – and get ready for yet more busy weeks. Definitely a fun time of year!